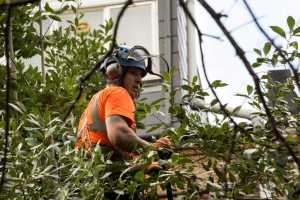 It’s not just about the trees, from apprentice to Team Leader, employee Tom Parriss is one of Artemis Tree Services’ biggest success stories.

After working in a well know chain of coffee shops, Tom wanted to work outside and had seen Artemis teams out and about. “I used to look outside and dream of being outdoors myself. I saw tree surgeons working and though I would love to do that. I saw an advert for the apprenticeship at Artemis and decided to give it a go.”

After a successful interview, Tom was offered the job. With the support of a college tutor and under the expert guidance out on site of Artemis Contracts Manager, Aaron Walsh, Tom completed his 12month apprenticeship in 2014. On graduating he became a Trainee Climber and within 6 months was promoted to Lead Climber. “For me being up in the trees is the best part of the job. It’s exhilarating and I get a real buzz when I see the result of my work”.

Tom continued to scale the heights within Artemis and through his enthusiasm, drive and great team player skills he worked his way up to Team Leader within another 6 months. Tom now manages teams of 7-8 people, liaises with clients and trains new staff. He recognises himself in the apprentices that join Artemis and is able to guide them through the process as a graduate himself.
His inspirational work ethic, positive outlook and fair approach mean he’s popular with his colleagues too. Artemis run an “employee of the month” reward scheme, where staff vote for their most deserving colleague. Tom is a regular winner of the employee of the month cash prize.

Later this year Tom is hoping to travel with Artemis to visit a Botanical Garden in Bulgaria and is continuing to further his skills by studying for his Level 4 diploma in Arboriculture. “I wouldn’t ever go back to being a barrista,” says Tom. “Although it’s hard work in the winter, you can’t beat being outdoors in the spring. I work with some great lads and I look forward to going to work, finding out if I’m felling a tree or just reshaping – each day is different”.

Since we posted our profile on Tom in March 2017, he has gone from strength to strength within Artemis.

These days as well as leading teams on-site, Tom goes out quoting. Tom is the first point of contact for clients and assess their tree work needs, allocating teams and resources. Tom is also studying for his Level 4 Diploma in Arboriculture as part of his continuing professional development.

If you would be interested in joining Artemis we are always looking for good people to join the team – from experienced climbers to entry level apprentices. Send your CV and introductory email to office@artemistreeservices.com or fill out our contact form on our apprenticeship page.